It's pretty easy to tell when I do my own backgrounds.

A Boy and His Dog-Type Girl.

If anybody ever takes the time to read the comments might have seen me spouting off about something that's binding my cheese. Welllllll, I changed my mind, I'm not going to talk about it. Why? Because I can. Instead let's be positive and talk about: 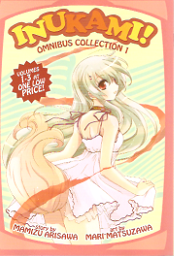 This weekend I was engaged in my usual pastime of going to book stores and reading the magazines without paying for them. When I was done I went to the manga section (big surprise, wasn't expecting that was you?) I was looking for the usual suspects and they weren't out yet. Then I spied the omnibus collection  of Inukami. The cover picturing a cute girl with the bushy tail had me picking it up and taking a much closer look. Yes, a very closer look.

To sum up the summery: "Ineffectual trainer has to train the untrainable." Wow, I've never seen that before *cough* pokemon *cough* kurumi *cough* Now my conundrum: which one to buy: The $16 volumes 1,2,3 or just the $10 volume 1? I hate spending even $10 on a book, I may not like it, but you can't judge a series on just one volume. It took about two volumes of Soul Eater for my to decide I didn't like it. (I do like the anime.) So I spend the extra six bucks and tax, (lotsa tax.) I figure if I don't like it and if there isn't any nudity I can give it to a friend of mine for his kid to read.

I liked it, I couldn't put it down. I went through Inukami that night, now I'm busy rereading it. Let's get the two major drawbacks out of the way. The nudity. While I love looking at naked women, there's a time and place. One of the places is certainly not in this story. Sometimes you have to take the unnecessary with everything else. The other bit is that Yoko's hair has a tendency to change color and style. Making it hard to read at some points.

This next criticism is not specific to Inukami, It's one I have of books, comics, TV shows in general: they're hard to follow at first. That's why I read through at least two volumes before making a decision on whether I like it or not. The creators are throwing all their ideas together trying to see what clicks and what doesn't. Establishing their characters and stories. That can take awhile. By about volume three of Inukami this is mostly settled and an actual conflict seems to be brewing.

To be honest, I don't know why I like Inukami. Why Oh My Goddess? Why am I still reading Lucky Star? I just do. Give Inukami a try, It can't hurt you. Well maybe drool over everything and scratch herself at inappropriate times.

Some of the more ironic comics I have done. I'm making my own emoticons, but I'm still using backgrounds from the game I got them from in the first place.
Posted by Joe at 12:00 AM 0 comments

Previews and Trailers: The Day I Dread Has Come.

Remember movies cassette tapes? I do. I also remember how in the beginning the FBI Warning and then the trailers for other movies were at the end of the tape. Then some genius got it in his head to put this stuff at the beginning of the tape. Why? Because no one would bother much with watching them. But they didn't count on the fast forward button. You still had to sit through the previews, but at least it was at least twice the normal speed.

Then comes DVD. Same thing: FBI Warning (oh, I'm soooo scared) and trailers. You could fast forward, and you can hit the Next button, or the menu button to skip all that and go straight to the movie. Then I got scared, Paramount, the guys who put out Star Trek, wouldn't let you skip their logo. Pop in most any Paramount DVD, you have to sit through. It's only a few seconds, but that's a few seconds I could be watching Kirk yell "KAAAAAHHHHHHN!!" Rhino DVD was even worse: you had to sit through the catapult sequence on each Transformers disk before you could even think of hearing Optimus Prime order "Autobots: Transform and ROLL OUT!" Youtube, they've been putting ads in videos for years now. WWE got in on the act. On each disk you can't fast forward, menu, or next through the "Don't try this at home." PSA. WWE I give a pass to because that is mostly important. But, hey, I wanna watch Nature Boy go "WOOOOOO!" Do I have to sit through the PSA on each disk?

I thought my greatest fear had been alleviated. The trailers and previews were moved from the beginning of the disk to its own sub menu. YES!!!! No more having to even think of having to see the Tsubasa preview. Okay, I still have to wait out the FBI Warning, but I beat that by using that time wisely by making a call on the porcelain phone.

A while ago, there I was, minding my own business, bothering absolutely nobody. I hadn't even updated the blog with my bumblings. I was having an oh so excellemundo time watching Sasami: Magical Girls Club (review to come) when the day I had long dreaded, the day I thought had been slayed, had come back with with a mighty vengeance. I put in disk three and the preview for Tsubasa came up. No biggie, just hit menu. Biggie. Hit next, even bigger biggie. Fast forward?

OH MY GODDESS! NOOOOOOOOOOOOO! KAAAAAAHHHN! STAAARRRRSCREAM!!!!!!!!!!! I couldn't skip the trailer! WHY! Haven't we suffered enough with the gross mis-pronunciation of names? Why must we be forced to sit through the previews? I had already seen the Tsubasa preview on another DVD. I was indifferent. Now I dislike it.

This is just one preview. What if they decide we need to sit through all 5, 10, 15 previews? Hey guys! You guys in the Anime DVD business. You're in enough trouble as it is. Best Buy is dropping Anime. Suncoast has long since disappeared from my area. Wally World only really carries Naruto and Dragon Ball. Hastings? At this point we're completely dependant on what somebody's mother decides to trade in behind his back. Amazon, sure we can go there, but I like to support my local businesses. And I get the disk in my hands right away.

Anime DVD dudes, don't give people any more  reasons to stop buying DVDs.
Posted by Joe at 12:00 AM 0 comments

Rosenkreuzstilette 106b Work Around of Sorts.

I was at a friend's place to help him fix his computer the other day. (I owed him a favor.) Mostly it wound being downloading and installing service packs, getting rid of no longer used programs, updating various other stuff. Taught him how to score free music off of YouTube. When I was done I turned it back over to him and started to leave. (I heard the latest issue of Rosario Vampire was out) when he tells me about this game he just got.

"I just bought this cool game. It's like Megaman only it's all girls. It's called Rosenkreuzstilette."

"Tell me more." I'm thinking: "This guy has been my friend now for several years, he's never been to my site? Hell, my own brother never even goes to my site. Let's see how far playing dumb can get me." (Believe me, I can take it pretty far.) My evil plot is to play the game and make all the usual first time mistakes: sliding into pits, jumping on the bad guys, thinking that spikes are cuddly. I'll let him think that he's teaching my something, then I'll spring the trap and not get killed until the Raymond Raimund Seyfarth Battle, or until I stupidly slide into a pit.

I blow it within one second. Mis Amigo still had the game windowed. In the upper left corner it said  "Rosenkreuzstilette - Version 1.05c."

"You bought it? From DLSite?"

"Could you download it again?" So he went to DLSite and re-downloaded it. Unzipped and indeed it was version 1.05c.

When I wrote my article about the 106a English Patch Workaround I had ASSumed that 106a was the version being offered from DLSite. The workaround is the same, but there is more detail to add. This works for people who have just bough the game, or those that have an un-altered copy of 105c from DLSite.

MAKE A BACK UP COPY! AND ONLY SCREW WITH THAT COPY!

Now, with the COPY apply the Rosenkreuzstilette English Patch. Note this makes an additional copy of the game. Next, with the COPY of Rosenkreuzstilette 105c you got from DLSite apply Patch 106b. Finally copy/paste the "scenario.dat" file from English Patch to 106b. This only changes the talking back and forth with the giant floating heads. This doesn't change any menus and other wossnames.

If you have already patched your one and only copy of Rosenkreuzstilette 105c from DLSite to 106b you are probably SOL. And I don't mean the Satellite of Love, worse. In doing the research for this I have yet to get the English Patch to work with any version other than what came from DLSite. I have version 1a that I got off that hard drive I bought at auction years ago. If I patch that one to 105c, the English patch fails. I swear to Belldandy that is the version I used to to apply the English patch from the very beginning. So you are going to have spend the $15 something dollars to get another copy.

There's a little bit more. I have actually been asked to provide links to or to send in email the English version of the "scenario.dat" file.

I have gone through the EULA for the Rosenkreuzstilette English Patch and the best of my understanding is that no individual part of the patch can be redistributed. Out of respect for the work I won't do that. I do suggest pestering the programmers  to release the "scenario.dat" file by itself. 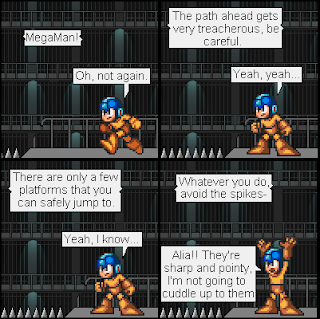 Picking my brian for some filler ideas to waste time until that oh-so special day in February.
Posted by Joe at 12:00 AM 1 comments
Newer Posts Older Posts Home
Subscribe to: Posts (Atom)