I hadn't planned on saying anything more about RosaVam until about the end of the year, but a little birdy shouted in my ear that I might want to say something more. He reminded me about how fortuitous it was to talk about some obscure Japanese video game when I did and it might behoove me to talk more about our favorite multiple personality complex vampire chick.

Talking about this issue let's get the one thing I didn't like at all out of the way first: the gore and viscera. One of the things that has made me kind of queasy through out the entire series is the blood. I understand that this is a monster manga but for the most part it's focus was romantic-comedy. Lately we have been treated to a big heaping doses of story telling. Along with that the realism has been getting more and more detailed. Now it is getting to a point that maybe going over the line even for me. There's a scene in which Moka's mother, Akasha, is cut in half and rather graphically depicted. Then later we see her laying down with some spilled guts.

I had mentioned several times before that I had considered dropping Rosario + Vampire from my reading list. There were several reasons I had been considering this action: kinda boring, no character development, occasional inappropriate sexual explicitness of characters younger than 18, in Yukari's and Koko's cases much younger than 18, and the occasional explicit blood and gore. Well, after 18 volumes it's kinda hard to just call it quits. If I do I more than likely in a few years I will just wind up going back and buying the back issues anyway to get caught up.

I'll tough it out a little while longer. Now let's get into some de ja vu.

To talk about that feeling I have seen it before I need to go back to Rosario to Vampire Season 2 Volume 17. I forgot to mention about this the last time, so I'll do it now. There's a scene where all the main characters are wandering around Fangfang's mansion. It's empty and they're trying to figure out where everybody else is at and it seems to be haunted. Other than most episodes of Scooby Doo, I kept having this feeling I had seen this before, but I couldn't remember where. I was going insane. (Going?) I knew I had seen it just within the past month of this issue.

Then Suzumiya Number 11 came in.

Well, Rosavam did it again. It's only been a couple of weeks since it's release so I won't do any spoilers as to what happens in this volume that set off my de ja vu detector. However that doesn't mean I can't talk about a now twelve year old anime that may or may not be similar. The final episodes of Orphen Season 2 had a big battle with an ancient beast that absorbed sorcerers to increase it's powers to escape a prison. The final episode saw two people, father and daughter, impaled by some tentacles and drawn back into the monster's prison to help protect a girl that had her personality subdued and replaced.

That comparison came to mind right away only because I had just watched Orphen a couple of weeks before. It was on sale for about $20. That's the way I run things now. I just wait for stuff to show up in the used video stores or for the super saver compilations. Guess that also shows just how interesting Suzumiya is to me.

The similarity of event between Rosavam and Orphen I think is purely unintentional. Just two great writers that happen to come up with same idea many years apart.

I've talked down on Rosavam enough. What stood out the most was the attention to detail. Most of this issue was very well drawn throughout. As an example close ups of characters mouths had a sense of depth. As in you were looking into their mouths and not at a painted on hole. The flower pattern on Aqua's dress wasn't just a stencil, it looked like each petal was carefully planned out as to what the flowers would actually look like depending on the pose. A scene of Akasha flying backwards in which we get a sorta upskirt that reveals the cage holding her skirt. You can even see the rivets holding the bandings together. We finally get to see Kurumu use her succubus powers. 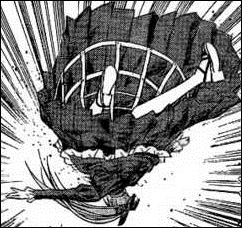 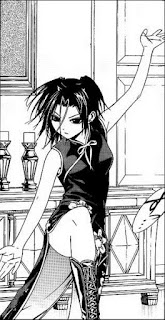 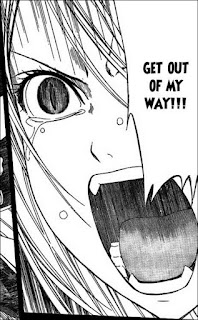 Which leads to a final question: of the three chosen characters to go inside Moka's mind, why Mizore? I understand Tsukune. Tohofuhai, I guess because in these things you have to have an old fart of a guide with you that knows everything. Mizore? Reminds me of the final chapters of Sailor Moon when the four asteroid named Sailor Scouts get told the entire story. Why them? Was Kurumu or Fangfang to obvious? Did it come down to a coin flip between Mizore and Yukari? How many licks does it take take to get the center of a Tootsie-Pop?

Now to answer some questions that other people have been asking. I know you have because I hired Kurumu's mom to peak inside your dreams.

“What chapters of Rosario Vampire have nudity?”

This particular volume has nudity in it. The typical non-detailed stuff that can get on Japanese broadcast TV at later times. This volume is rated older teen, but what does that mean? Is that 17, 18, and 19? A friend of mine said no way would he allow such a thing in his house. He doesn't mind it personally, he just doesn't want his kids to see it. I remind him that it was his son that told me about the site that I got all these manga scans from. Boys will be boys.

You'll note that I make sure NOT to give the name of the sites I got these scans from. I believe in supporting the original artists as much as possible. You can go to Amazon, Hastings, or Borders to find your own copy of Rosario Vampire Volume 18. Of course I have no qualms about using someone else's time to save me an extra $10 and a day or so of ripping up a copy and scanning it.

Though I will say thank you and I do appreciate the effort put forth in some people's buying the original Japanese volumes, ripping them up, scanning, and translating them. 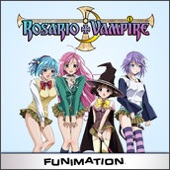 “Is Rosario Vampire too explicit?”

Depends on your point of view. Look at the ratings. Though that can be entirely misleading. Which is one of the reasons I ranted so much last year about nudity. I have planned further ranting about that for a later date.

You have to look through it yourself and make up your own mind.

“Why did Yukari say old farts in episode 6 of Rosario + Vampire?”

I went back and watched both episodes 6. I never heard her say "old fart." In the English dub she called Kurumu a “moo-cow.” I think it was added in by the English writers to better fit the mouth movements and to play off the rivalry between the two. 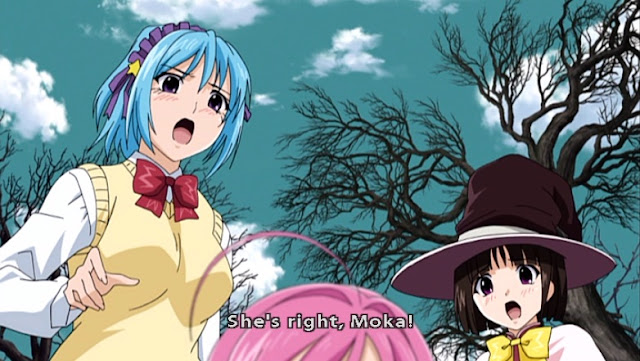 Addendum January 23, 2013: In doing research for the third article I have been watching the anime. And I have discovered that Yukari did indeed say old farts. It was in episode 7. After having been dumped in the lake, Moka, Tsukune, and Kurumu are in the News Paper Club room wrapped up in blankets sneezing and bitching about Mizore, A.K.A. "Frosty the Snow Skank." In that situation it makes perfect sense to call them "old farts." Have you ever been in a retirement home?

Unfortunately that's all the questions. Ageha got pissed because she caught me ... er...uhm... someone dreaming about Tsurara, in bloomers. I ..er...That person is alright but will have to use his non-dominant hand to type out blog entries for awhile.

Over the past few years there has been heated debate over global warming/climate change and how much is contributed to it by man, and how best to alleviate this burning issue.

I said awhile back I try to be non-partisan and stay away from more scorching issues. I certainly do recognize it is very hard not to get all boiled over this subject. So I'm not going to get into a blazing debate over the red hot facts here, at all. Instead I'll just post this photo I took the other morning and let y'all make up your own mind. 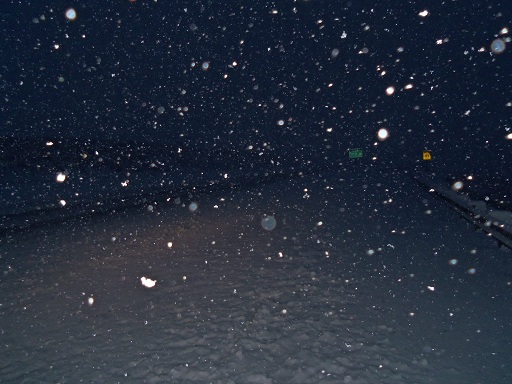