You've probably gotten those Nigerian Prince emails, right? Now it's Libyan General pleas for help. I got an email the other day from someone that was a general's daughter. You can pretty much guess the rest. Her daddy was killed and she managed to escape with much of "his money." Now she is stuck in some other African country. Her accounts have been frozen and she needs a loan to finish her escape. All she needs is your credit card number or better yet you bank account routing number.

The sad part is that these scams do work on enough people so that they keep doing it.

Admittedly I really only read the first few lines of that email. I mean, come on, you're asking a guy that does a webcomic and reviews manga, for money? (Now THAT'S a segue.) 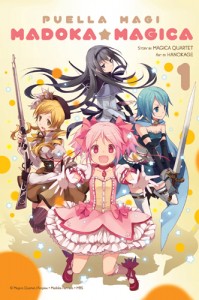 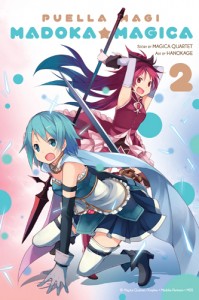 Looking at it on the shelf you would think to yourself that this is just another magical girl snooze fest. I decided to pick it up and give it a try. You just don't know unless you give it a chance. A lot of the stuff you would expect is indeed in there. Younger teen lead character with overly bubbly personality: Check. Totally impractical silly costumes: check. Weird hair styles: check. Cute animal sidekick that has a bad habit of not telling you what you need to know: check. Guns: check.

Hand grenades? Blood? Head splatters? Trying to kill each other? Holy cow! This is done by people that are sick and tired of She-Ra, Sailor Moon, and Pretty Sammy. Parents watch out. This is NOT for little girls. Yeah you get the “Does this ribbon make me look pretty?” conversations. That is quickly dispensed with in favor of scenes of possessed people attempting mass suicide. You wouldn't guess that looking at the covers. It looks like some kind of super heroine team. Anything but. Homura spends most of her time fighting everybody. Mami dies. Sayaka gets a little bloodthirsty. Madoka has yet to transform by the end of volume two.

I think I got a winner here. Now I admit I'm bothered by the fact that the main characters are in their younger teens, but, this is a magic girl manga after all. Graphically it swings between the simplistic: characters on a white background, to hard to follow complex action. The writing is good for the most part with some leaps in logic that leave you scratching your head. Of course if it was all logical then it wouldn't be mahou shoujo. I really like the character development. Each one has some kind of back story that is tragic and can even twist a character into something quite unexpected.

In my research for this article I was totally unable to find any scans of it what so ever. The site I got the images for Rosario Vampire did not have Madoka. Yen Press didn't have it in it's app store. So no extra images to comment on. I did find a few episodes of the anime on one of the manga sites I go to. This series is trippy. The one thing I didn't like was packing in too much detail. Glass walled classrooms? Those hallways, jeeze they're huge. Just because you can do it, doesn't mean you have to. All that detail overpowers the characters on screen and make it even more difficult to read the subtitles. Fortunately the DVDs I ordered are in English. What I liked the most was how the character animation looked almost like color manga. It was awesome.

The battles in the witches' wards piqued my interest. It seemed very much like British animation I watched a very long time ago. Maybe some inspiration from Ralph Bakshi. With a twisted twist of Terry Gilliam.

Can't wait for volume three. When's that out? December? Aw man.
Posted by Joe at 12:00 AM 0 comments

I bought my first computer way back in, well, it was quite awhile ago now. I'll just say it was the period of time I got tot watch anime such as Samurai X, Power Stone, Dual, and Ghostsweepers before they came out here in the States, in English, and mostly uncut. Even then I was not new to computers. My family has had one of some kind since as long as I can remember. A VIC-20 and then a Commodore 64. Admittedly I only used them for video games. It was my mom that actually used them as PCs. She was practically running the local library with a C64.

Fast forward a few years, (and minus a lot of stories because I think they're irrelevant) I decided it was time for me to buy my first PC. It was a Compaq Pressario with 475 MHz (that's mega) CPU. 32 MB (that's mega) of ram. Finally an eight GB hard drive ( that's eight, as it 8, not eighty, not 800, 8.) Even then at that time I noted something was hinky. Windows wasn't reporting the total usable space as 8GB. I asked the computer nerds at the time what was up. They all told me that the missing space was being used by Windows and other programs. I believed it for awhile. Then as I bought bigger and bigger hard drives, the amount of space Windows used stayed the same, but the amount of usable space went down even more.

How could this be?

I would learn that it was the way Windows reported usable hard drive capacity as opposed to the way hard drive manufacturers reported capacity. Manufacturers used the a base of 1000. Microsoft used 1024. This was a burning issue some ten years ago. At least every few months in the computer mags I read there would be a letter from a reader asking about that. In those days of 4, 8, 10, 20 GB hard drives, that was a big deal. I think the controversy has died in this age of terabytes. As long as we can can fit all of our music and movies onto one. If that should fill up, just get another terabyte drive that is cheaper than a forty GB was ten years ago.

The one thing I never saw anywhere was an actual study done as to the comparison of drive space lost to actual manufacturer specs. So I decided I was bored enough to do that study. On top of that I also decide to see which operating system did the best job of using hard drive space.

First the OSes: Windows 7 Home 64 SP1, because it is the most common one you will find.
Mac Snow Leopard Extended (Journeled) because I have a disk of it.
Then Ubuntu Linux 64 12.04 64 ext4 because I'm most familiar with it.

Next I needed some hard drives. A 500, 1000, and 2000 GB. Arbitrarily decided. Two test systems. Why two instead of one? The Intel system requires that I burn the Linux distro onto a CD. The AMD one I can use a thumb drive. The test systems:

For Windows and Linux:

Installing each OS was interesting. Linux took the least amount of time at about 15 or so minutes. Windows was up around a half and hour. Mac took the longest. First I hard to use a boot disk based on a Linux distro and then swap out for the Mac disk. Then Mac took so long to load up I was able to play a good chunk of an old SNES game and paste together a couple of dozen comics for next year. I also noted that a couple of options in the Mac setup were identical to ones used in Linux. Specifically the pick your time zone map. I guess possibly because both were originally derivatives of Unix.

Mac had an interesting quirk: after installing on the 500GB drive it would boot up just fine. However on the 1TB and 2TB drives I had to use the boot disk. I guess possibly because I not familiar enough with the Mac setup options and clicked something that caused this.

Back to the main point:

The interesting thing I noted was that each OS fairly accurately reported the total capacity of each hard drive. However total usable space was quite different.

Linux was the worse of them all. The only consistent number I could get was that the bigger the hard drive, the more space the file system used. I tried three different methods and each one gave me wildly different sets of numbers. The most I can say is that Linux used up the most space.(I did try Linux Mint, the now most popular distro, same messed up results.)

Windows was middle of the road. On each hard drive it used 14GB of space. The usable capacities looked like this:

Your mileage will vary. Keep in mind, store bought systems usually have hidden partitions for OS reboot. My test involved a wiped hard drive with only the partitions made by the OS. As we can see the bigger the hard drive, the more space is lost. Looks to be about 10GB per 100GB. Seeing as how a 2TB drive effectively costs less than a 200GB drive; no big deal nowadays.

Now for Mac. Mind you, I don't care for Mac. One reason is that I have to click twice to eject a disk instead of just pushing the damn button on the optical. However, might I say, it was the best in hard drives. Let's see shall we?

Is this real? Can some Mac addict set me straight on these numbers? Really? (say it like The Miz now:) Really?

There it is, my little contribution to a long dead conversation.
Posted by Joe at 12:00 AM 0 comments
Newer Posts Older Posts Home
Subscribe to: Posts (Atom)